What does caziques, a Native American chieftain, and quixotry, meaning visionary schemes, have in common? And what has this to do with Alfred Butts? Well Alfred Butts was an inventor of a board game ……

Alfred Mosher Butts, an architect in Jackson Heights, New York, enjoyed chess, crosswords and word games. After he lost his job at Holden McLaughlin and Associates in 1931 during the Great Depression, he set out to design a word game that utilized both chance and skill by combining elements of anagrams and crossword puzzles, a popular pastime of the 1920s. He studied the front page of The New York Times to calculate how frequently each letter of the alphabet was used so as to determine how many of each letter he would include in the game. He found that just 12 letters (E, T, A, O, I, N, S, H, R, D, L and U) accounted for 80% of the letters that are normally used. Although ‘S’ was a very common letter, he decided to only include four ‘S’ tiles to avoid making the game too easy by having too many plurals.

Butts called the game ‘Lexiko’. Players would draw nine lettered tiles from a pool of 100 tiles and then attempt to form words from their letters. It was initially played without a board. Scores were calculated according to the length of the words formed. The first players were Mr Butts, his wife, Nina, and their friends. Mrs Butts was better at the game than her inventor spouse, and he admitted that she ‘beat me at my own game,’ literally. 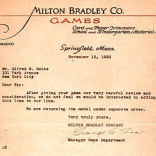 In 1933 Butts unsuccessfully tried to register the trademark of his new board game, and he approached all the major games manufacturers, including Milton Bradley and Parker Brothers, but they rejected the game. He changed the name to ‘IT’, then to ‘Criss Cross’, and in 1938, he changed it again to ‘Criss-Cross Words’. He added the 15×15 square gameboard, reduced the number of tiles held at time to seven, and changed squares to double or triple the value of the letter or word placed on them. Butts manufactured some 200 sets himself, $2 a set plus 25 cents for shipping, but again the games manufacturers were not interested. By then Butts was again employed as an architect and he put aside his efforts to develop the game, which was relegated to a novelty played by a handful of people.

In 1948, Butts sold the rights of his game to James Brunot, a Federal official and social worker, who had a friend who had bought one of Butts’ handmade sets. Butts, as the inventor, retained the patent rights of the game and earned royalties on each set sold. Brunot added the 50-point rule for playing all seven tiles at once, changed the colours on the board, and came up with the name Scrabble, a word meaning ‘to scrape or grope around frantically with your hands’ from the Dutch ‘schrabben’ to scrape or scratch.

Brunot trademarked Scrabble in December 1948, and started making the game in his living room in Dodgington, Newtown in Connecticut. His wife, Helen, and friends helped him stamp the letters on wooden tiles. But the Scrabble cottage industry quickly outgrew their home. ‘Couldn’t move’ Brunot told an interviewer, ‘no room for anything but boxes and racks and tiles’, so they then rented an old schoolhouse nearby. In 1949, the Brunots made 2,400 sets, turning out 12 sets an hour, but they lost $450. However the game was steadily gaining popularity.

Then in the early 1950s, as legend has it, Jack Strauss, the Chairman of Macy’s, the ‘world’s largest department store’ in New York, saw the game being played whilst on holiday. On his return he was surprised to find that Macy’s didn’t stock the game so he placed a large order. Within a year everyone ‘had to have one’, and Scrabble sets were rationed in stores around the country. By 1953 the Brunots had moved the business to a converted woodworking shop where 35 employees working in two shifts produced 6,000 Scrabble sets a week.

The following year, when Richard Selchow realised that the numbers of Scrabble boards and boxes being produced was growing and growing, he changed his mind and agreement was reached with the Brunots to buy the rights to produce and market Scrabble.Though they were able to make the tiles and racks, they had a lot of problems producing the boards and boxes, so James Brunot went to the games maker Selchow & Righter, one of the companies that had rejected Arthur Butts years before, and asked them to produce the game. But Richard Selchow, the owner, declined as he felt that the game wouldn’t be a big enough seller. However a contract was agreed with a junior executive to produce the Scrabble boards and boxes.

In 1954 J W Spears, a board games company based in Brimsdown, Enfield in England, acquired the rights to produce and market Scrabble outside North America and began selling the game in the UK in January 1955.

In 1972, Selchow & Righter bought the trademark to the game. Until then, Alfred Butts had earned royalties, which he said were about three cents a set. ‘One-third went to taxes,’ he said. ‘I gave one-third away, and the other third enabled me to have an enjoyable life.’

In 1986, Coleco bought Selchow & Righter, together with the North American rights to Scrabble. When Coleco went bust in 1989, its principal assets, including Scrabble, were purchased by a subsidiary of Hasbro, MB (Milton Bradley), another one of the manufacturers who had rejected the original game in the late 1930s. J W Spear & Sons was taken over by Mattel in 1994 after a bidding war with Hasbro. The rights of the board game are still divided between Hasbro and Mattel.

In 1991 the first Scrabble World Championship was held in London. The second championship took place in New York in 1993.

One hundred and fifty million sets of Scrabble have been sold in 121 countries worldwide, and it is available in 29 languages.

There are official lists of Scrabble words derived from well-know dictionaries that are used in Scrabble tournaments to settle arguments over whether or not a word that is played on the board is allowed or not. Most competitors though will know which words are allowed having memorised huge numbers of the words. Tournaments in North America use the Merriam-Webster’s Dictionaryas its source of approved words, but remove words that are deemed to be offensive. The rest of the world uses Collins English Dictionary, though Chambers English Dictionary had been used previously.

As an architect, Butts enjoyed some success, with a housing project on Staten Island and the Stanford Free Library in upstate New York. He was also an amateur artist and six of his drawings are in the New York Metropolitan Museum of Art. Alfred Mosher Butts died in 1993, aged 92.Butts invented another game, Alfred’s Other Game, in 1985, It was a solitaire version of Scrabble in which four players have their own boards and compete to create the highest score. It was marketed with a picture of 86 year-old Butts sitting next to a glamorous woman in a black cocktail dress, but it didn’t repeat the success of Scrabble.

To finish here are a few Scrabble word facts, though you will find that there are competing claims for some of them.

The highest recorded word score is 392 for CAZIQUES (a Native American chieftain), played by Karl Khoshnaw on a double and triple-score squares during a contest in Manchester in 1982.

ETHYLENEDIAMINETETRAACETATES (an organic acid) with 28 letters, is the longest technically acceptable Scrabble word, but as there are only 15 spaces across or down the board it’s impossible to use.The words MUZJIKS (a Russian peasant) has the highest score of 29 (ignoring double or triple score tiles), and the highest possible opening score of 128. This is followed by QUARTZY and SQUEEZY worth 28 points. Though these two words are not recognised by North American Scrabble tournaments, they are allowed just about everywhere else. If you want to play safe you can use JUKEBOX, MEZQUIT, OR CAZIQUE (as above) which score 27 points.

There are 124 two-letter playable Scrabble words, and 5,757 15-letter words, the number of squares across or down the board. For many Scrabble players, drawing a Q is likely to produce a sigh, but one of the two-letter words now allowed is Qi, the fundamental life force in Chinese philosophy. And there are 33 words that have a Q without a U, though like Qi they are all pretty obscure.

In 2006, two men in Lexington, Massachusetts in the USA, set three Scrabble records (at least for North America). One of them, a carpenter named Michael Cresta, had the most points in a game by one player (830), and the most points on a single turn (365) for QUIXOTRY (visionary schemes), (though see CAZIQUES above). And with his opponent, Wayne Yorra, a supermarket worker, they had the highest combined score (1,320). However some have argued that it was a fluke as neither player had high ratings in tournaments, and that the previous record of 770 points in a game by one player, was bound to fall one day given that in North America, there are more than 200 Scrabble clubs, and more than 200 tournaments a year. You can read the full story of the game here.

How Nancy Reagan Gave Glamour and Class to the White House

We woke reasonably late following the feast and free flowing wine the night before. After gathering ourselves and our packs, we...
Read more
Architecture

We woke reasonably late following the feast and free flowing wine the night before. After gathering ourselves and our packs, we...
Read more
Architecture

The Next Wave of Superheroes Has Arrived with Astonishing Impact

We woke reasonably late following the feast and free flowing wine the night before. After gathering ourselves and our packs, we...
Read more
Load more

How Nancy Reagan Gave Glamour and Class to the White House